Rock Systems was called to action when a wine producer needed a system to remove metal from grape pomace. Pomace is the seeds, skins, stems and solid matter that are left behind after the grapes are crushed. The pomace is sold as cattle feed. However, if any metal is collected during the harvest of the grapes, it must be removed from the pomace or it may cause irreparable harm to the cows if ingested. The metal can include grape stakes, trellis ties or equipment parts.

Rock Systems designed a portable 48” wide x 55’ long transfer conveyor equipped with a permanent cross belt magnetic separator and a magnetic head pulley to remove the metal. These magnets are typically used in recycling operations to remove rebar and tramp iron from concrete while making base rock. Since pomace is organic and can be stringy, a portable open throat feed hopper with a drag chain feeder was designed to feed the pomace at a consistent rate to the transfer conveyor. A diesel generator with an electric control panel mounted on the trailer provides power for the equipment. A Doosan front end loader with a high capacity bucket feeds the pomace into the portable feed hopper. A wireless remote control allows the front end loader operator to start and stop the system as necessary.

Once the magnets have removed the undesirable metal, the clean pomace is loaded directly into trucks for shipment to customers; and the metal is collected in bins for recycling. 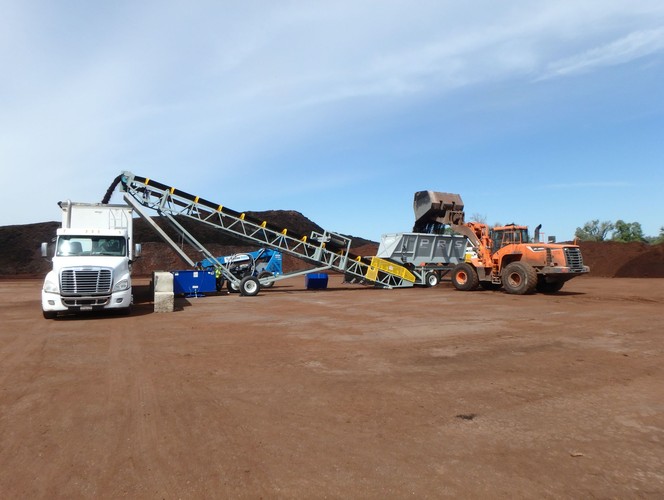